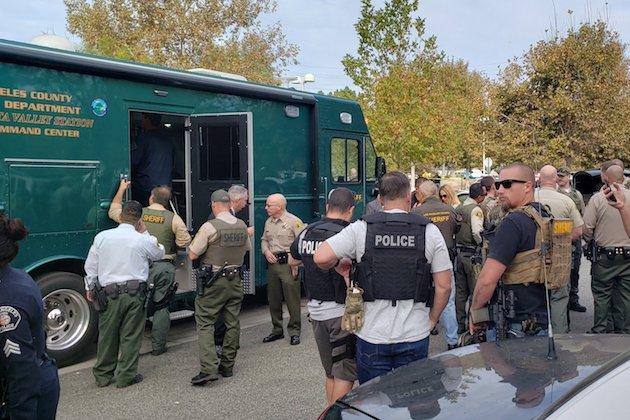 SANTA CLARITA, California - Two school kids, one aged 14 and the other sixteen, are dead after a mass shooting at a Californian school on Thursday.

The shooting took place in Los Angelas Country at the Saugus High School in Santa Clarita, which is 40 miles (65km) north of Los Angeles.

It occurred just prior to school commencing.

A fellow high school student in a quadrangle produced a .45 caliber semiautomatic handgun out of his backpack and vegan firing on fellow classmates on Thursday morning.

Aside from the two dead, another 3 students are injured. The boy with the gun was also injured and has been admitted to hospital in what police say is 'grave condition.' He is under heavy guard after shooting himself in the head. The shooter apparently turned 16 on the day he of the shooting.

"Video clearly shows the subject in the quad, withdraw a gun from his backpack, shoot and wound five people and then shoot himself," Captain Kent Wegener of the Los Angeles County Sheriff's Department told reporters at a press briefing on Thursday.

The kids who died in the attack were a 14 year old boy and a sixteen year old girl. Another 14-year old boy was injured, while a girl 14 and another 15 were also injured, Wegener confirmed.

The shooter has been identified but his name has not been released. "There's nothing really that stands out. He wasn't a loner. Wasn't socially awkward. Was involved in student activities. Student athlete. This is kind of out of the blue, shocking pretty much everyone who knew him," Los Angeles County Sheriff Alex Villanueva told CNN's "New Day" early Friday.

"The shooting at Saugus High School in Santa Clarita, CA is at least the 85th incident of gunfire on school grounds this year," Everytown, an advocacy group working to end gun violence and build safer communities posted on Twitter. "We need meaningful action that keeps our schools safe, action that approaches the problem from all angles."

WASHINGTON, DC - The novel coronavirus is continuing to spread in the United States, particularly in the western and southern ...

Philippine government to offer jobs at home for returning Filipinos

ZAMBOANGA CITY, Philippines July 5 (PIA) - The returning Filipinos who arrived Sunday in the city from Sabah in Malaysia ...

World must be better equipped to manage crises and future plagues

Wherever one is at anywhere in the world today - given the yet unknown first, second, third, fourth or however ...

Iran seeking return of 3 diplomats and journalist abducted in 1982

TEHRAN, Iran - Iran is rallying the international community in a bid to clarify the whereabouts, and return, of three ...

Afghans to farewell U.S. troops, as Taliban prepares to take over

LONDON, UK - The only element of the Afghan peace plan going according to schedule is the withdrawal of American ...

Demand for oil may have peaked

PARIS, France - Although crude prices have rebounded from coronavirus crisis lows, oil executives and experts are starting to ask ...

Nationalism an earth-shattering trend in shaping economies of future

Former U.S. Treasury Secretary Lawrence Summers has recently conceded: "In general, economic thinking has privileged efficiency over resilience, and it ...

A million Russians predicted to declare bankruptcy in coming months

Moscow [Russia], July 4 (ANI): As countries across the globe have been facing the worst collective economic downturn since the ...

LONDON, UK - It was a quiet day on world markets on Friday with U.S. markets closed ahead of the ...

Coronavirus has had an unprecedented impact on pubs in Britain. The British Beer and Pub Association estimates that the industry ...

NEW DELHI, India, July 3 (ANI): The ban on international commercial passenger flights to and from India has been extended ...