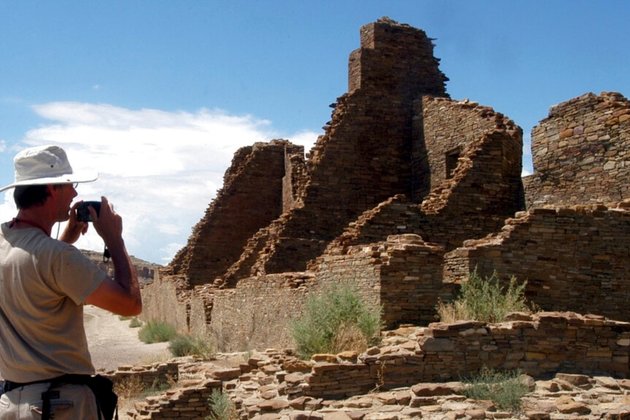 CHACO CULTURE NATIONAL HISTORIC PARK, NEW MEXICO - The stillness that enveloped Chaco Canyon was broken only by the sound of a raven's wings as it circled overhead.

Then a chorus of leaders from several Native American tribes began to speak, their voices echoing off the nearby sandstone cliffs.

The Indigenous leaders from the Hopi Tribe in Arizona and several New Mexico pueblos were beyond grateful that the federal government is taking what they believe to be more meaningful steps toward permanent protections for cultural resources in northwestern New Mexico.

They spoke of a deep connection to the canyon - the heart of Chaco Culture National Historic Park - and the importance of ensuring that oil and gas development beyond the park's boundaries does not sever that tie for future generations.

After fighting for years with multiple presidential administrations, they're optimistic the needle is moving now that one of their own - U.S. Interior Secretary Deb Haaland - holds the reins of the federal agency that oversees energy development and tribal affairs.

Haaland, who is from Laguna Pueblo and is the first Native American to lead a Cabinet agency, joined tribal leaders at Chaco this week to celebrate the beginning of a process that aims to withdraw federal land holdings within 10 miles (16 kilometers) of the park boundary, making the area off-limits to oil and gas leasing for 20 years.

New leases on federal land in the area will be halted for the next two years while the withdrawal proposal is considered.

Haaland also committed to taking a broader look at how federal land across the region can be better managed while taking into account environmental effects and cultural preservation.

'It's a nice day - a beautiful day that our father the sun blessed us with. The creator laid out the groundwork for today,' Hopi Vice Chairman Clark Tenakhongva said Monday.

A World Heritage site, Chaco is thought to be the center of what was once a hub of Indigenous civilization with many tribes from the Southwest tracing their roots to the high desert outpost.

Within the park, walls of stacked stone jut from the bottom of the canyon, some perfectly aligned with the seasonal movements of the sun and moon. Circular subterranean rooms called kivas are cut into the desert floor, and archaeologists have found evidence of great roads that stretched across what are now New Mexico, Arizona, Utah and Colorado.

Visitors often marvel at the architectural prowess of Chaco's early residents. But for many Indigenous people in the Southwest, Chaco Canyon holds a more esoteric significance.

The Hopi call it 'Yupkoyvi,' simply translated as way beyond the other side of the mountains.

'Whose land do we all occupy? We walk the land of the creator. That's what was told to us at the beginning - at the bottom of the Grand Canyon,' Tenakhongva said. 'Many of us have that connection. Many of us can relate to how important the Grand Canyon is. Ask the Zuni, the Laguna, the Acoma. They made their trip from there to this region. We know the importance of these areas.'

Pueblo leaders also talked about areas near Zuni Pueblo in western New Mexico and Bears Ears National Monument in Utah that are tied to Chaco civilization.

Laguna Governor Martin Kowemy Jr. said Chaco is a vital part of who his people are.

'Pueblo people can all relate through song, prayer and pilgrimage,' he said. 'Now more than ever, connections to our peoples' identities are a source of strength in difficult times. We must ensure these connections will not be severed, but remain intact for future generations.'

Acoma Pueblo Governor Brian Vallo said the beliefs, songs, ceremonies and other traditions that have defined generations of Pueblo people originated at Chaco.

'Our fight to protect this sacred place is rooted in what our elders teach us and what we know as descendants of those who settled here,' Vallo said. 'That is our responsibility - to maintain our connection, our deep-felt obligation and protective stewardship of this sacred place.'

Both the Obama and Trump administrations put on hold leases adjacent to the park through agency actions, but some tribes, archaeologists and environmentalists have been pushing for permanent protections.

Congressional legislation is pending, but there has been disagreement over how big the buffer should be.

The Navajo Nation oversees much of the land that makes up the jurisdictional checkerboard surrounding the national park. Some parts belong to individual Navajos who were allotted land by the federal government generations ago.

Navajo leaders support preserving parts of the area but have said individual allottees stand to lose an important income source if the land is made off-limits to development. Millions of dollars in royalties are at stake for tribal members who are grappling with poverty and high unemployment rates.

Haaland's agency has vowed to consult with tribes over the next two years as the withdrawal proposal is considered, but top Navajo leaders are suggesting they're being ignored. Noticeably absent from Monday's celebration were the highest elected leaders of the tribe's legislative and executive branches.

Navajo Nation Council Delegate Daniel Tso has been among a minority within tribal government speaking out against development in the region. He said communities east of Chaco are 'under siege' from increased drilling.

No matter what side they're on, many Navajos feel their voices aren't being heard.

Haaland on Monday invited everyone to participate in the listening sessions that will be held as part of the process, which she has dubbed 'Honoring Chaco.'

Environmentalists say the region is a prime example of the problems of tribal consultation and that Haaland's effort could mark a shift toward more tribal involvement in future decision-making when it comes to identifying and protecting cultural resources.

'By creating a new collaborative process with 'Honoring Chaco' we have the ability to ameliorate broken promises and to right the wrongs of consultation just being a check-the-box exercise,' said Rebecca Sobel, of the group WildEarth Guardians. 'Hopefully it will be the beginning of a new relationship.'