VANCOUVER, BC / ACCESSWIRE / January 25, 2022 / iMetal Resources, Inc. (TSX.V:IMR)(OTC PINK:ADTFF)(FRANKFURT:A7V2) ('iMetal' or the 'Company') is pleased to announce it has entered into an agreement pursuant to which it has been granted the option to acquire the 665 hectare Kerrs Gold Deposit, 90 kilometres east-northeast of Timmins, Ontario, in the Abitibi Greenstone Gold Belt.

The Kerrs Gold Deposit is comprised of a series of gold-bearing pyritized quartz vein replacement breccias enveloped by quartz fuchsite carbonate vein breccias averaging 10 metres in thickness. The deposit hosts an historical resource estimate of 7,041,460 tonnes grading 1.71 g/t gold yielding 386,467 ounces at a 0.5 g/t gold cut-off. Drilling subsequent to the historic estimate appears to have extended the mineralized zone along strike and down dip.

'The Kerrs Gold Deposit is a significant advanced gold asset located in one of the premier mining camps in Canada,' commented iMetal CEO Saf Dhillon. 'The Company leapt at the chance to complement our existing Ontario gold portfolio with the Kerrs Deposit. Once the technical team completes a thorough review of the historical database, iMetal will concentrate on both bringing the historical resource current as well as formulating a development plan to further expanding it.' he continued.

The Kerrs Gold historical resources estimate was disclosed in 'NI 43-101 Resource Estimation on the Kerrs Gold Deposit, Matheson, Ontario' prepared for Sheltered Oak Resources Inc. by Garth Kirkham, P. Geo of Kirkham Geosystems Ltd. and dated June 10, 2011. The Company considers the resource estimate relevant as it will drive further exploration by the Company and reliable, as it was completed by a competent Qualified Person to the standards of the day. The resource estimation methods and parameters were as follows:

iMetal is not treating the historical estimate as a current mineral resource. 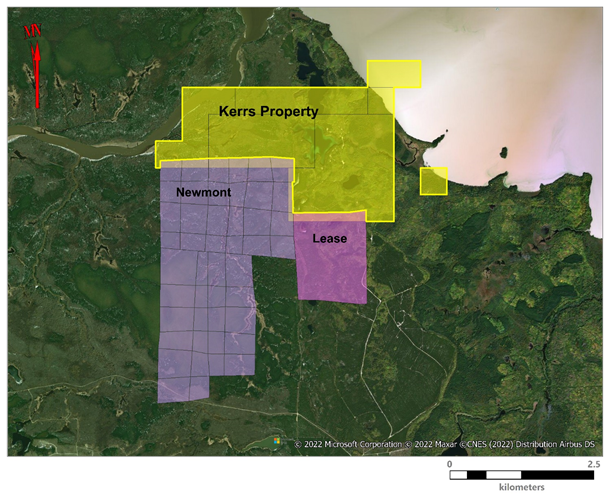 The Deposit was discovered by Noranda in the late 1970's early 1980's by following glacial dispersion trains up-ice to the source. Drilling continued into the late 1980's, with further drilling in the early to late-2000's and early 2011's. The drilling database was used to calculate the 2011 historic resource estimate, with further drilling completed subsequent to the release of the estimate. The Kerrs Gold Deposit consists of a series of gold-bearing pyritized quartz vein replacement breccias enveloped by quartz fuchsite carbonate vein breccias averaging approximately 10 metres and alteration envelopes varying up to 40 metres in thickness. Gold is directly related to pyrite content which ranges to 10% and is commonly found as disseminations and crystal aggregates in the sheeted, quartz vein replacement breccias. These breccias, averaging 31% quartz, exhibit reasonable correlation conforming to volcano-stratigraphic contacts as well as moderate to good continuity in grade correlations at the lower and upper boundaries of the vein breccia and alteration envelope assemblages.

The Kerrs Gold Deposit is stratabound, occurring at the contact of a thick, mafic pillow flow sequence overlying an ultramafic, magnetite-rich flow sequence. Quartz feldspar porphyry sills are spatially located above and below the breccia zones. This stratigraphy is synclinally folded with the deposit lying 350 m to 425 m below surface. Drilling has traced the main zone 800 metres and remains open in both directions and at depth.

iMetal entered into a purchase option agreement (the 'Option Agreement'), dated January 24th, 2022, with Gravel Ridge Resources Ltd. and 1544230 Ontario Inc. (collectively, the 'Vendors') pursuant to which it will be granted the right to acquire the Kerrs Gold Deposit.

To acquire the Deposit, the Company is required to issue 3,500,000 common shares (the 'Consideration Shares') and complete a series of four cash payments totaling $210,000 to the Vendors as follows:

Following completion of the above cash payments and share issuances, the Company will acquire the Deposit and will grant to the Vendors a three percent royalty (the 'Royalty') on net smelter returns from the Deposit. The Company may acquire two percent of the Royalty from the Vendors at any time by completing a one-time cash payment of $2,000,000.

The Company is at arms-length from each of the Vendors. No finders' fees or commissions are payable in connection with the acquisition of the Project. Consummation of the Option Agreement, and the issuance of the Consideration Shares, remains subject to receipt of the Exchange Approval. Upon issuance, the Consideration Shares will be subject to a four-month-and-one-day statutory hold period in accordance with applicable securities laws.

The Company also announces that it will conduct a non-brokered private placement (the 'Placement') of up to 18,500,000 units (each, a 'Unit') at a price of $0.11 per Unit for gross proceeds of up to $2,035,000. Each 'Unit' will consist of one common share of the Company and one common share purchase warrant exercisable to acquire an additional common share at a price of $0.20 for a period of twenty-four (24) months (each, a 'Warrant'). The Warrants will be subject to accelerated expiry in the event the closing price of the common shares of the Company exceeds $0.35 for ten (10) consecutive trading days.

The scientific and technical information contained in this news release has been reviewed and approved by R. Tim Henneberry, P. Geo (British Columbia), a director of iMetal and a qualified person as defined in National Instrument 43-101.

A Canadian based junior exploration company focused on the exploration and development of its portfolio of resource properties in Ontario and Quebec. iMetal is focused on advancing its Gowganda West Project that borders the Juby Project, an advanced exploration-stage gold project located within the Shining Tree Camp area in the southern part of the Abitibi Greenstone Gold Belt about 100 km south-southeast of the Timmins Gold Camp.

ON BEHALF OF THE BOARD OF DIRECTORS,

TOKYO, Japan: U.S. President Joe Biden said this week that he supports calls for Japan to become a permanent member ...

NEW YORK CITY, New York: The market for global online tutoring services is expected to grow from $21 million in ...