How the USSR traded with the West despite the Iron Curtain 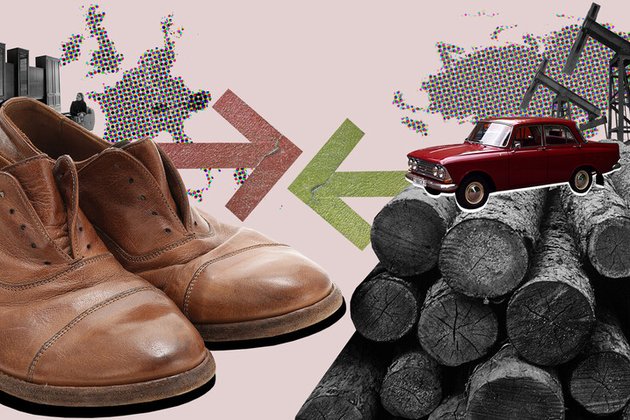 It's generally considered that the Soviet economy was isolated and cut off from the world behind the Iron Curtain during the decades of the Cold War. In reality, however, the situation was much more complex.

"So much extra for your money with Moskvich 4-door saloons and estate!" promises an ad for the Soviet car Moskvich 408 (also called Scaldia 408) that was published in the July 1968 issue of the British magazine Autocar. 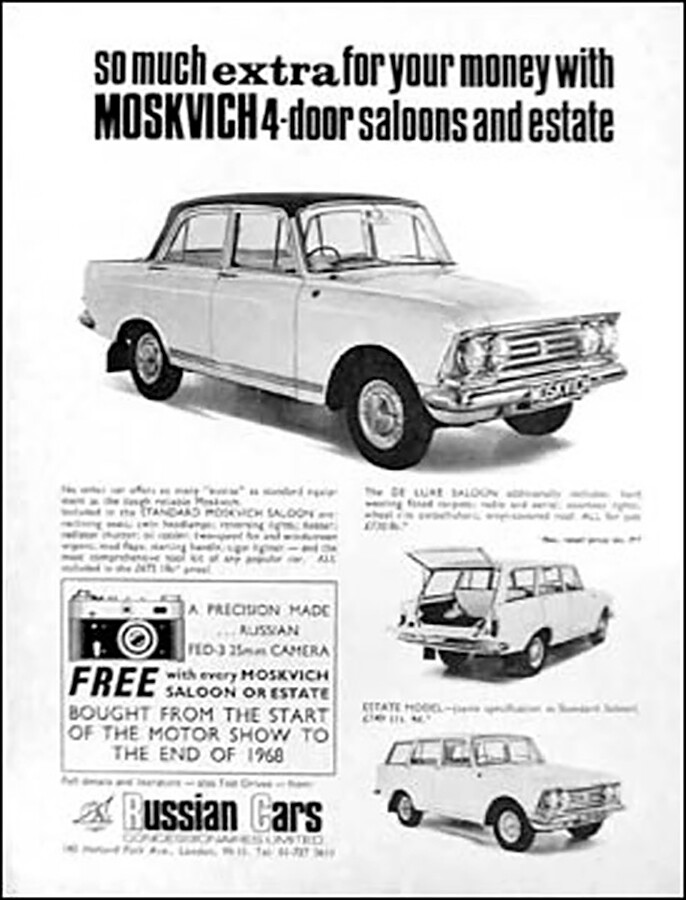 Despite the very tense relations during the Cold War, the USSR was quite active trading with the West. Besides the auto industry, photography equipment was another successful Soviet export. The Zenit camera was a big hit in the UK, the U.S., France, and other European countries (under the brands Cosmorex, Kalimar, Spiraflex, Phokina).

For the most part, however, Soviet consumer goods were not widely sold overseas. In the end, the main Soviet export products were natural resources, such as oil and gas. The trade deal, known as "gas in exchange for pipes", began a long-term energy partnership with Europe. The USSR, for example, imported foreign equipment for the construction of major railroad projects and water canals.

Was there really an Iron Curtain? 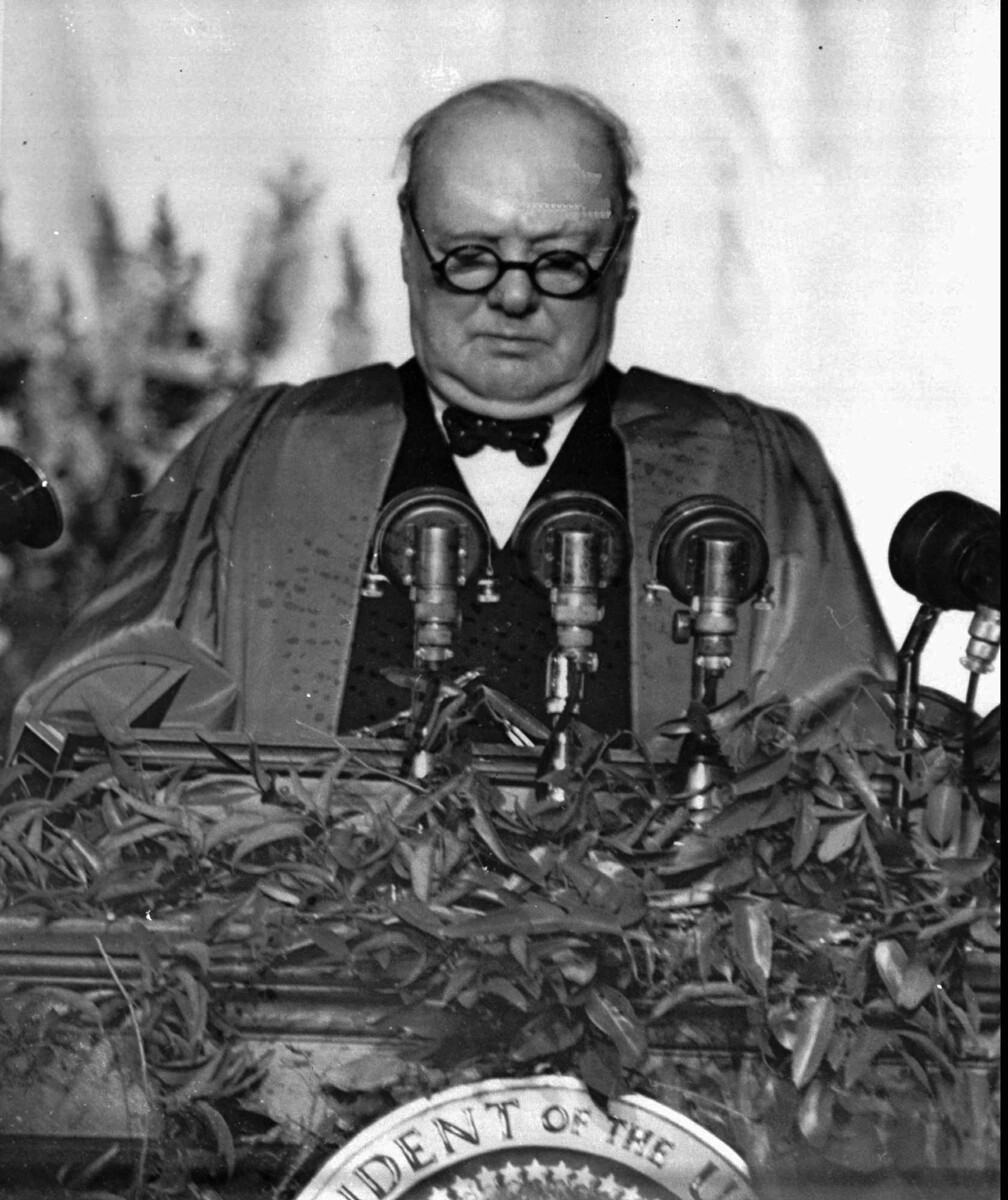 The "Iron Curtain" cliche coined by British Prime Minister Winston Churchill in 1946 during his Sinews of Peace speech, heralded the beginning of the Cold War between the USSR and Western countries. In 1949, to oppose the UK, the U.S., and their allies, and to maintain close ties with friendly countries in the postwar period, the USSR created the Council for Mutual Economic Assistance (COMECON).

This organization included the countries of the socialist camp: Poland, Bulgaria, Czechoslovakia, Hungary, Romania, and Albania (until 1962), and later was joined by the German Democratic Republic, Mongolia, Cuba, and Vietnam. COMECON members became the USSR's main trading partners in the second half of the 20th century.

The COMECON members purchased fuel from the USSR - at prices lower than global prices - and supplied the USSR with machinery, equipment, agricultural, industrial, and consumer goods. According to 1960 data, the Soviet Union received 58% of its imports from COMECON members and in turn exported 56% of its goods to them.

In 1956, the First Secretary of the Communist Party of the Soviet Union, Nikita Khrushchev, announced de-Stalinization of the country and a course towards "peaceful coexistence" with the capitalist world. Along with a large Soviet delegation, in 1959 he visited the U.S. where he became acquainted with the latest technological advances in various industries. Some of these, in one way or another, were later implemented in the Soviet Union. 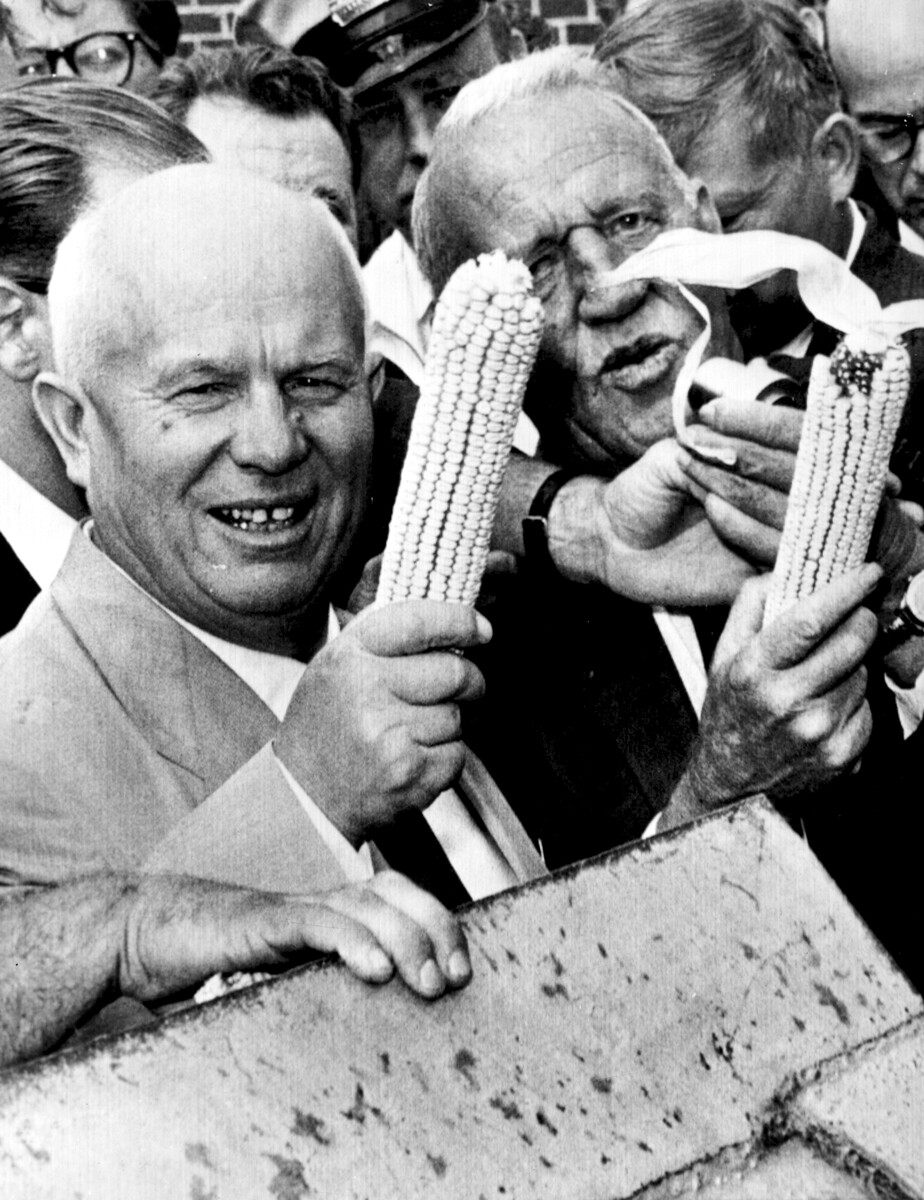 Leonid Brezhnev, who replaced Khrushchev in 1964, continued the policy of detente with the industrially developed capitalist countries (the U.S., France, Spain, Italy, Japan, West Germany, and others), all the while maintaining close relations with the COMECON countries. In 1975, along with the heads of 34 countries, including the U.S. and Europe, the USSR signed the Final Act on Security and Cooperation in Europe.

However, relations with the U.S. were strained again in 1979 when Soviet troops deployed to Afghanistan. Nevertheless, by 1986, about 67% of the USSR's foreign trade came from socialist countries, 22% from capitalist countries, and 11% from developing countries. Export revenues made up 20% of the Soviet state budget.

Soviet exports to the West 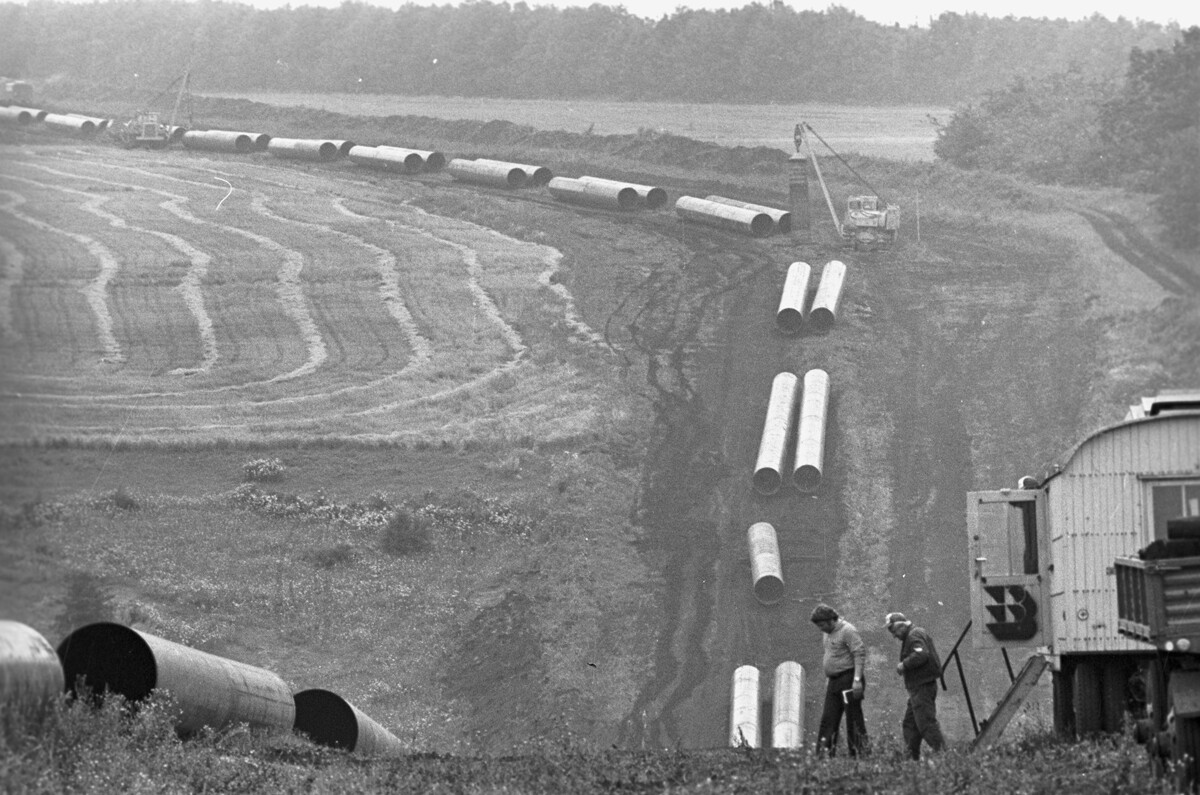 In the 1970-80s, the USSR became a major fuel exporter to the West - selling oil and natural gas. At that time the economies of European countries were struggling economically and required cheap energy resources.

From 1970 to 1986, the share of gas supplies in the overall Soviet export volume grew from 1% to 15%. In 1970, the USSR signed an agreement with West Germany whereby the latter supplied the USSR with large-diameter pipes and equipment to build a gas pipeline to Western Europe in exchange for gas from Western Siberia.

Despite intense dissatisfaction and vociferous objections from the Americans, this deal became one of the most important in the list of long-term contracts of gas supplies that was signed with the countries of Western Europe (France, Italy, Austria, etc).

The second significant export category was machinery, equipment, and vehicles. In 1986, it accounted for about 15% of exports. 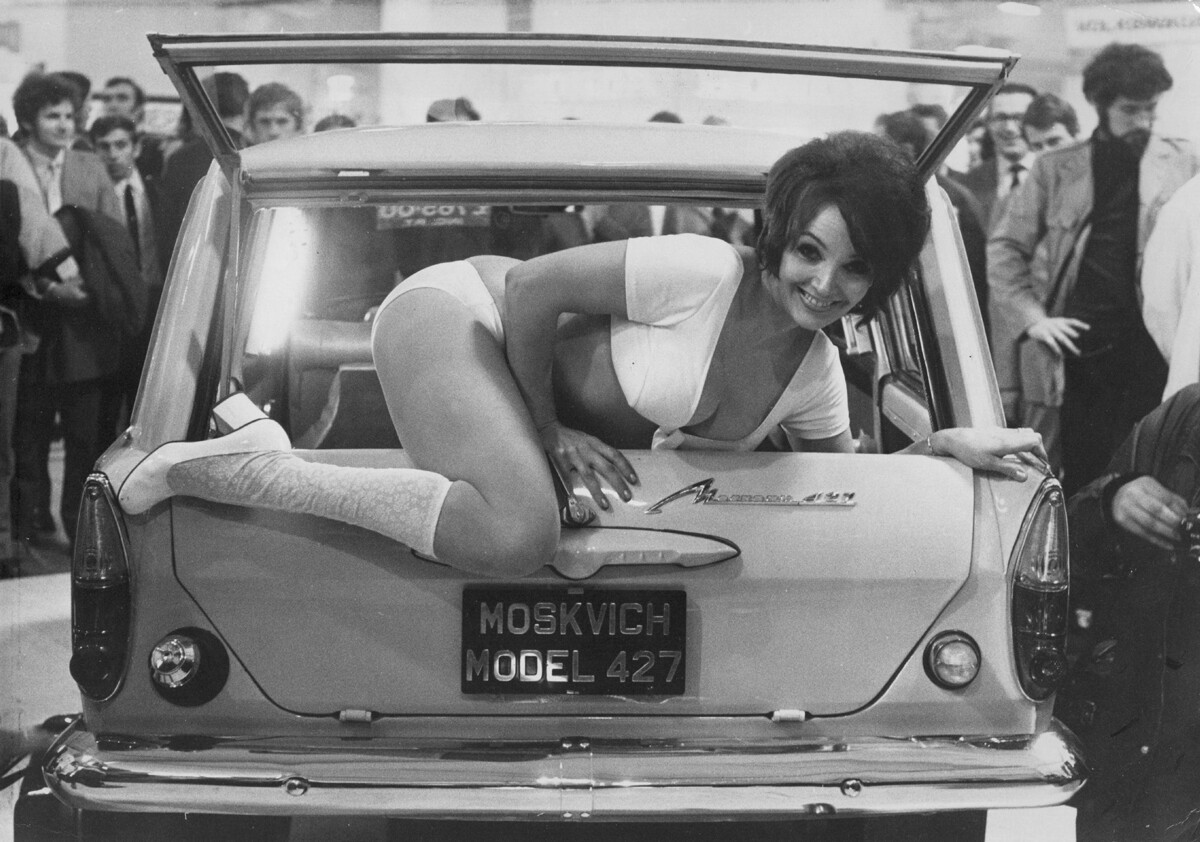 For example, the Moskvitch car made by the MZMA factory (later called AZLK) became famous in Europe after participating in an international car rally in the late 1960s. Consumers in France and the UK began to eagerly buy it. Moskvitchs were also assembled at factories in Bulgaria (under the brand Rila) and in Belgium (under the brand Scaldia).

READ MORE: This is how the USSR sold cars to the West

The USSR supplied the West with power-generating equipment for hydro- and thermal power plants, nuclear reactors, and also sold licenses to manufacture turbines and generators, as well as power plant projects.

The share of other goods, exported during the last decade of the USSR, was noticeably inferior to those categories above, although many Europeans have nostalgic feelings towards the Soviet Zenit camera, the Poljot wristwatch, and the Micro radio receiver. 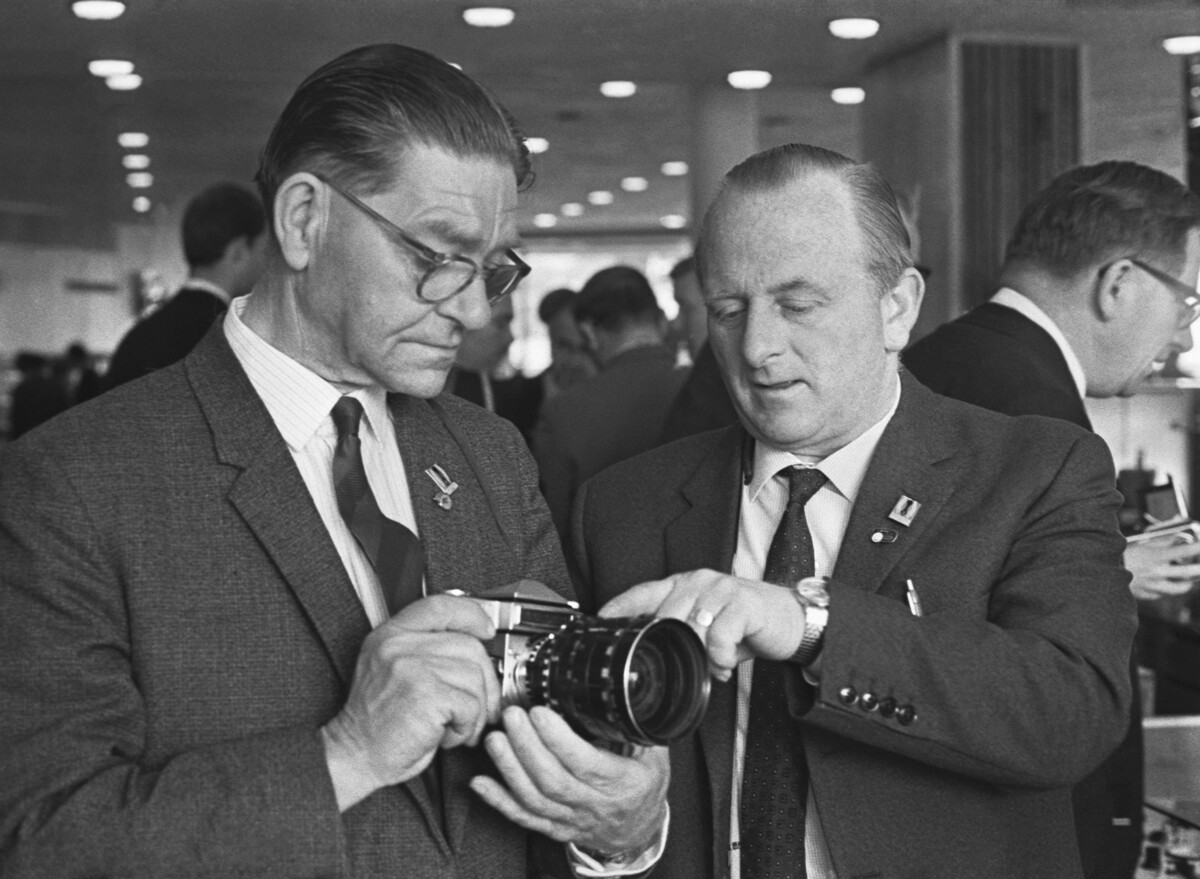 British businessmen take a look at the Zenit-6 camera. Moscow, 1968.

Soviet imports from the West

According to data, from 1940 to 1986 more than 30% of Soviet imports were accounted for the purchase abroad of machinery, equipment, and the purchase of various vehicles. In 1986, these already made up 40.7% of total imports.

From 1945 to 1991, about 500,000 cars were imported into the USSR. Foreign trucks - Tatra 111, Skoda-LIAZ, Mitsubishi-Fuso, and Komatsu-Nissan - could be spotted at the country's main construction sites (Volga-Don Canal, Baikal-Amur Mainline).

For many decades, even domestically produced cars remained a luxury item. Only the political elite and members of society's highest and most inner circles enjoyed foreign cars. While trucks and road equipment made up 3.5% of total imports in 1986, cars, motorcycles, and scooters made up only 0.5%. 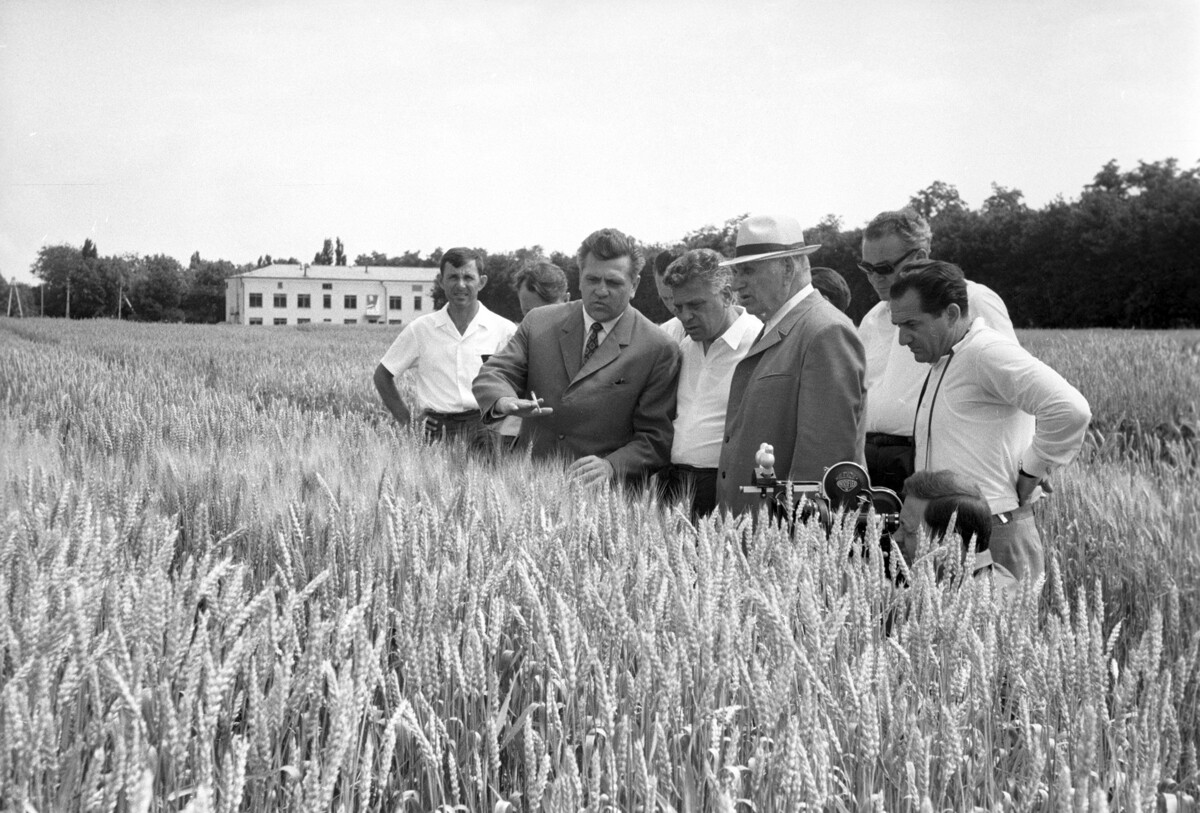 Food was second place on the list of goods imported into the Soviet Union. Due to urbanization and the migration of the population from the villages to the cities, the country faced food shortages. In the beginning of the 1960s some regions utilized food rationing; there were shortages of meat, milk, and grain, as well as other food products.

As for grain, after World War II the USSR resumed grain exports to Europe, and by 1952 this amounted to 4.5 million tons exported per year. Wanting to increase the volumes, the USSR began the development of virgin lands in Kazakhstan. However, due to the difficult climate, it didn't yield the expected results.

Besides the fact that grain was needed by the population of the vast country, as well as exported, large volumes also had to be fed to livestock. So, the Soviet government came up with a program to improve domestic production of meat and milk. A campaign was launched to grow corn under the policy of the First Secretary of the Communist Party of the Soviet Union, Nikita Khrushchev; (launched after his trip to the U.S.).

But this also didn't help despite the fact that a sizable part of the state agricultural budget was spent to plant it. By 1963 the USSR had to begin importing feed grain from the U.S. and Canada. In 1972, import volumes were 23 million tons of grain; in 1980 - 43 million tons. 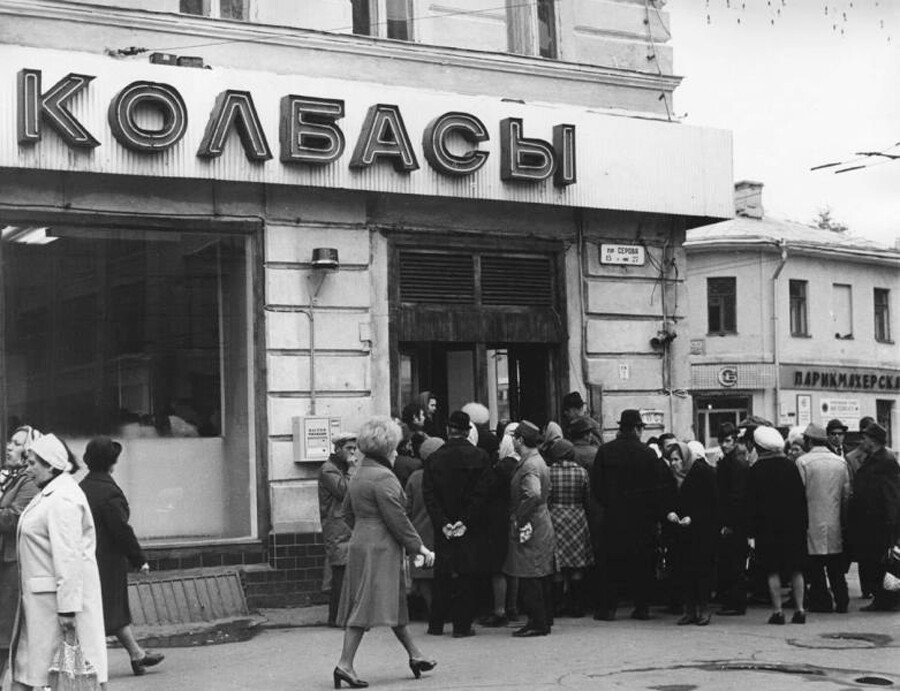 Following the death of Joseph Stalin, in the late 1950s the USSR began policies to improve the population's well-being. Still, there weren't enough Soviet consumer goods for everyone.

In 1981, the Congress of the Communist Party of the Soviet Union stated that "from year to year the production plans of many types of consumer goods are failing - especially fabrics, knitwear, and leather footwear." At that time, there was 2.1 knitwear and 3.2 pairs of footwear per capita. The funds earned from exporting energy supplies went to buy leather footwear, knitwear, cotton and silk fabrics, medicines, and more.

Because of the policy of communal apartment resettlement and into separate apartments, there was rising demand for furniture. Soviet citizens dreamed of Czech and Romanian furniture. Buyers lined up in local stores across the country. Despite the growth of imports of consumer goods, the final decade of the USSR is remembered by many Soviet citizens as a time of widespread shortages.

Our website and social media accounts are under threat of being restricted or banned, due to the current circumstances. So, to keep up with our latest content, simply do the following:

MATERA, Italy: In off-the-cuff remarks on September 26, Pope Francis urged Italians to have more children. While in southern Italy ...

WASHINGTON D.C.: The Biden Administration and the Australian government are in discussions regarding the U.S. building the island nation's first ...

OTTAWA, Canada: Canada has appointed Jennifer May as its first female ambassador to China, taking over a role that has ...

WASHINGTON D.C.: In the past three weeks, the latest campaign to offer a second Covid booster shot has seen 4.4 ...

MOSCOW, Russia: Employees at Russian airlines and airports have begun receiving army draft orders, as reported this week by the ...

DETROIT, Michigan: General Motors has announced that it will invest $760 million in its Toledo, Ohio factory to build drive ...

After Covid shutdown, China allows reopening of Macao in November

MACAU, Macao: After Macao's chief executive Ho Iat Seng announced this week that China would resume an e-visa scheme for ...

SYDNEY, NSW, Australia - Stocks in Asia plummeted on Wednesday as the U.S. dollar continued to surge.Fears of higher interest ...

FRANKFURT, Germany: Deutsche Bank analyst George Saravelos said the Bank of England must raise interest rates as early as next ...

TOKYO, Japan: As Japanese firms are coping with a global economic slowdown and high energy and raw material costs exacerbated ...

NEW YORK, New York - Stocks were choppy on global markets Tuesday as investors struggled with a slew of bad ...

News of the World